Hugh Edwardes, Lord Kensington was born 3rd Sept 1873, son of the 4th Baron and his wife Grace, an old Etonian (1891) he entered the army as 2/Lt with the 15th Hussars and later served in the Boer War as ADC to Lt Gen. H.M.L. Rundle, for which he was Mentioned in Despatches and awarded the DSO, (27/9/01) “In recognition of services during the operations in South Africa”. He had succeeded his brother to the title  in 1900 as the 6th Baron Kensington. On the outbreak of war, he was gazetted Adjutant to the Welsh Horse Yeo in Aug 1914 and was promoted Lt Col (18/8/14) to command the regiment. He took them to Gallipoli, landing at Anzac, where he saw action from 10th Oct 1915 to Dec 1915 and commanded the rear guard action with 100 men on "Hill 60" for the withdrawal from the peninsula, was Mentioned in Despatches. He then took the regiment  to Egypt and saw action in Palestine, where on the amalgamation with the Montgomery Yeo, to form the new 25th Bn RWF, he commanded the battalion. Was in the fighting in the attacks on both the Wadi Zait and Wadi Shebab during November 1917. Then in May 1918 he took the battalion to France where he saw action until the end of hostilities. Was appointed a CMG and was Mentioned in Despatches again. He was Hon Col. Pembroke Heavy Brigade R.A. in 1924. And awarded the TD (31/10/24). 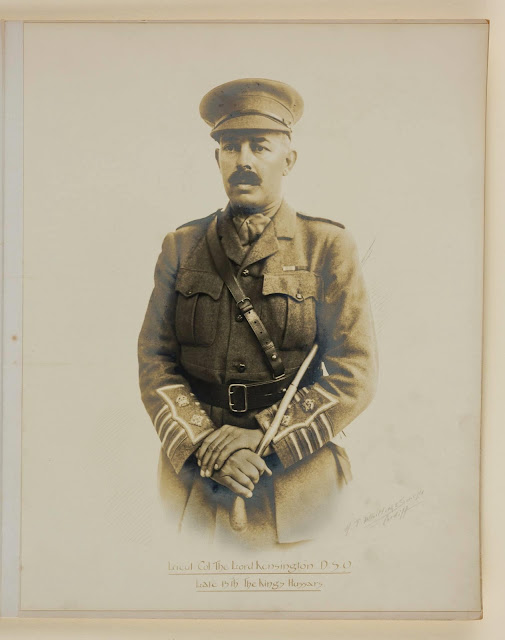