30 MARCH - ON THIS DAY IN ROYAL WELCH HISTORY

Sergeant Ford 17 RWF won Albert Medal, 1916Sgt Albert Ford was instructing men in live grenade throwing at Gorre, France. A grenade was thrown so that it hit the traverse and dropped, smoking, into the trench. Ford pushed past the man and managed to pick it up and throw it clear. It exploded immediately on leaving his hand. In 1940 the Albert Medal was replaced by the George Cross. In 1972 Ford exchanged his AM for a GC, the only Royal Welchman to receive this rare award. 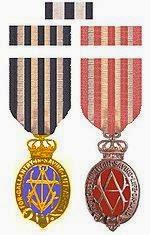 We are looking for RWF photos in WW1 - can you help us?


We are trying to put each man’s name (who Fell) on display on a screen on the centenary of his death and would dearly love to be able to add a photograph of each man to go with his name. It is a huge undertaking as there were over 10,400 men from the RWF that were killed. But even if we only get a fraction of the photographs we believe it is worth doing. Many of the RWF were from all over so we are asking please could you help?


You can help us by circulating our plea to anybody who is interested. Many families have photographs tucked away so this might prompt them to seek them out. We accept scans or copies and any that appeared in newspapers, which often carried obituaries including photographs.
We need as much information as possible to go with the photo to make sure we fit the right photo to the right man – but sometimes a name and date of death might be all we need. 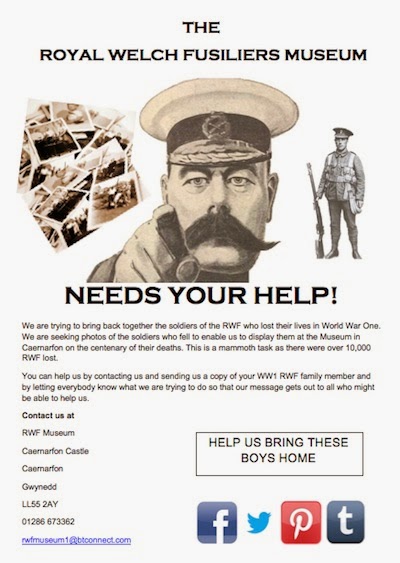 #WW1Centenary We are working on creating a WW1 archive of all RWF soldiers. Need photographs please! rwfmuseum1@btconnect.com
Posted by RWF Museum at 07:04 No comments:

The Museum is housed in Caernarfon Castle.  In it you will find a wealth of original exhibits, supported by film,  sound and models, which tell the story of over 300 years of service by Wales’ oldest infantry regiment, in peacetime and in war, all around the world. 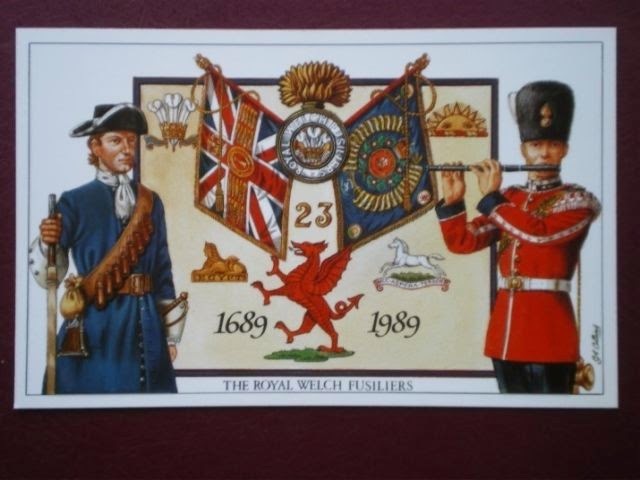 Visit our Museum and you can learn how the Regiment won 14 Victoria Crosses and hear the words of the famous writers who served with the Royal Welch during the First World War - Siegfried Sassoon, Robert Graves, “Hedd Wyn”, David Jones and Frank Richards.

You will see what life was like for the ordinary soldier and his family and discover the Regiment’s  unique traditions Royal Welch history begins with the campaigns of William III, and includes Marlborough’s wars, the American War of Independence, the wars with Revolutionary and Napoleonic France, the Crimean War, the Boer  War and China.

Many battalions of the Regiment saw action in the First and Second World Wars.

In peacetime the Royal Welch has provided garrison troops in Canada, India, Hong Kong and the West Indies.

More recently the Royal Welch has carried out many tours of duty in Northern Ireland and has been deployed on peace-keeping and humanitarian operations, often under the UN or NATO.   These have included missions in Bosnia, Iraq and Afghanistan.

The Museum has thousands of stories to tell - from the experiences of an individual soldier to the history of an entire battalion.  Many of the objects on display have a hidden history linking them to a soldier, places and events.  It is not possible to explore all these stories within the Museum where space is limited.

Instead items of particular interest will appear on our website www.rwfmuseum.org.uk and here on our social media pages Facebook, Twitter, Pinterest, Tumblr Flickr and now Blogger - presented by experts and enthusiasts alike.  New stories are regularly added so there should always be something new to read.  If you would like to contribute a short article about an object on display or an aspect of Royal Welch history, please contact us on rwfmuseum1@btconnect.com.
Posted by RWF Museum at 14:10

You can contact us on rwfmuseum1@btconnect.com if you have any ideas for this blog.
Thank you. Diolch yn fawr 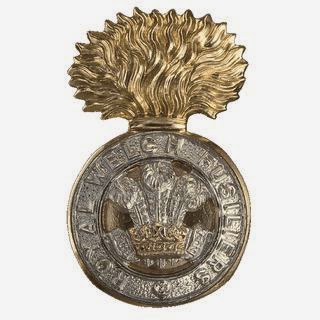