Lt Col Henry Walton Ellis mortally wounded at The Battle of Waterloo succumbed to his wounds.

He was born on 29 November 1782, the son of Lieutenant-Colonel John Joyner Ellis, RWF (q.v.), and his wife Sarah (née Walton), and was christened in St Nicholas’ Church, Worcester almost a year later, on 6 October 1783. There is still uncertainty as to where he was born, which may be connected with the long period between his birth and baptism. The often-quoted Cambray could be near Cheltenham, or possibly Cambrai, in what is now north-eastern France.
His father purchased a commission for him as ensign in 89th Foot, when he was only a few weeks old on 26 March 1783. When 89th Foot was disbanded later the same year the baby was placed on half pay, but on 21 September 1789 he was brought onto full pay as ensign in 41st Foot (aged 5); lieutenant 31 March 1792 and captain-lieutenant 15 December 1794.
He transferred to RWF as captain-lieutenant on 3 September 1795 and was promoted captain RWF on 20 January 1796; major on 23 October 1804; Lieutenant Colonel in command on 23 April 1807 and colonel on 14 June 1814. He was nominated KCB on 2 January 1815.
During his service he was wounded no less than eight times, including the expedition to the Helder in 1799, at Alexandria in 1801, at Albuera being ‘shot badly through the right hand’, at the storming and capture of Badajoz, at Salamanca and in the Pyrenees.
On 26 December 1814 the county and city of Worcester presented Sir Henry with a splendid silver-gilt vase, which had been funded by public subscription, “in testimony of the high sense they entertain of your meritorious services, so repeatedly displayed in the defence of your country . . . .”. At the same ceremony he was presented with the honorary freedom of the City of Worcester. Detailed accounts of the ceremonies were printed in Berrow’s Worcester Journal of 29 December, and the Worcester Herald of 31 December.
At the battle of Waterloo he was severely wounded in the chest by a musket ball. “Feeling himself faint from loss of blood, he calmly desired an opening to be made in the square and rode to the rear. At a short distance from the field he was thrown from his horse while in the act of leaping a ditch; here he was found soon afterwards, much exhausted, and conveyed to a nearby out-house where his wound was dressed. In the course of the night of 19 June the hovel in which he was lodged unfortunately caught fire and he was with difficulty rescued from the flames by Assistant Surgeon Monroe of the RWF, but was exhausted by so many shocks and on 20 June expired”. He was aged 32.
He was buried on the battlefield of Waterloo, but there is doubt as to exactly where. The Wellington museum at Waterloo, an authoritative source on the battle, consider that ‘Sir Henry Ellis was buried in the cemetery next to the church of Waterloo, which is confirmed by Tarlier and Wauters (1869) [Historians, who wrote about the French Empire]. This cemetery (700 feet from the church) was to the west of the church and is then not on the museum side. The former cemetery was closed between 1955 and 1975. We suppose that Sir H. Ellis’ body was not found 150 years after his burying and the monument which was on his grave was moved to the Wellington museum. That’s how it arrived here. . . . It's possible that he was first buried in the yard of the house where he died, but probably not in Braine-l’Alleud, or then he would have been moved to Braine-l’Alleud cemetery instead of Waterloo. He was surely buried in Waterloo and maybe close to the windmill of Waterloo, situated close to the place where the road from Nivelles is meeting the one Charleroi-Brussels.’ 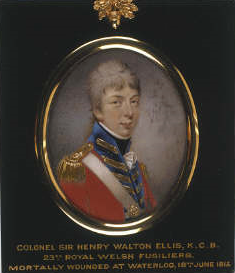 18TH JUNE 1815 – ON THIS DAY IN ROYAL WELCH HISTORY - Battle of Waterloo, Belgium

During the battle the RWF in Mitchell’s Brigade was moved into the first line which they anchored on its right flank and covered Hougoumont. This was to the immediate right of the main line of attack of the French cavalry. It was during one of these attacks that the commanding officer, Colonel Sir Henry Ellis, was fatally wounded. The Regiment suffered much from the French guns and suffered 100 casualties. WATERLOO was granted as a battle
honour.
Dragon Rampant by Canadian Military Historian gives an excellent account of exploits of The 23rd Foot, The Royal Welch Fusiliers in the battle. 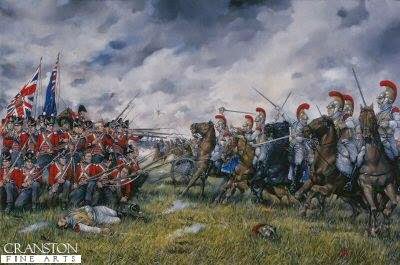 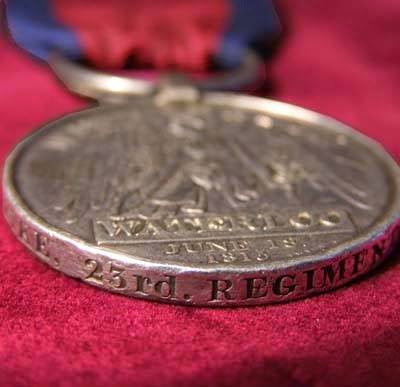 With the closure of the Regimental Depot at Wrexham in March 1960 the museum was moved to the Queen’s Tower at Caernarfon Castle. The museum was opened by the Colonel of the Regiment, General Sir Hugh Stockwell. The first Curator of the Museum was Major Peter Kirby MC TD FMA DL who build the oak staircases and original display cabinets himself. The staircases are still in excellent working order today! 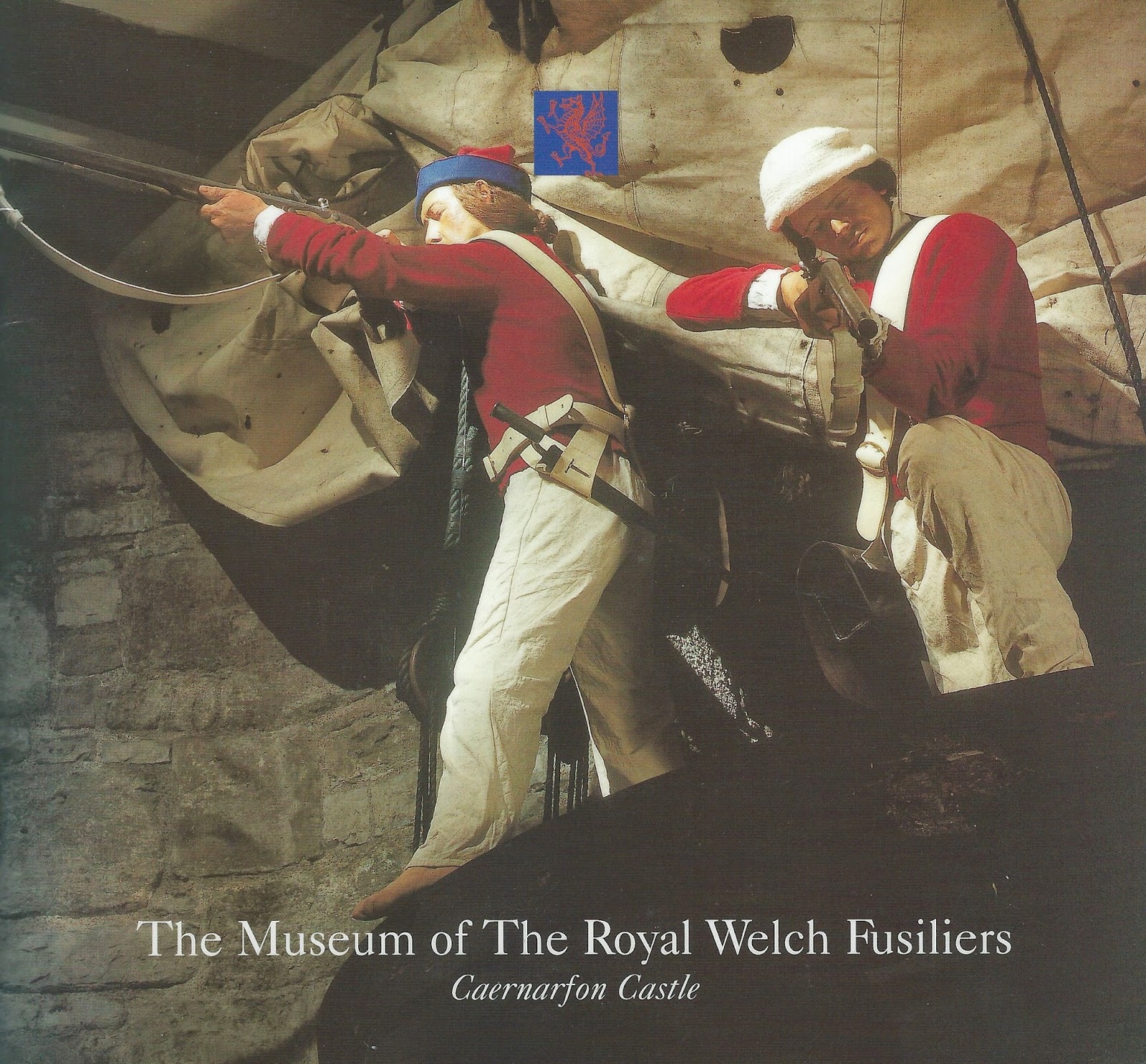